Worth a watch – our 4 favourite James Bond timepieces

There are very few fictional characters who can equal James Bond’s sterling reputation for truly effortless style. Along with his deadly efficiency and lady-killing charm, his immaculate dress sense is one of the most iconic elements of his character, and a quality that’s stayed consistent throughout all his different portrayals over the years.

Naturally, his luxury watches have always been an essential part of his outfits, but for the super-suave super-spy, they had a particularly special significance. Not only were they integral to his sense of style, but they were often outfitted with his trademark gadgetry. In his first few films, Sean Connery’s Bond typically wore Rolexes, although he notably switched to Seiko watches when the watchmaking industry was gripped by the Quartz Crisis of the 1970s and 80s.

Seiko’s run proved short-lived, however, as OMEGA became the franchise’s official watch partner with the release of GoldenEye. The character enjoys quite the horological legacy, and luxury watch connoisseurs often find themselves just as fascinated by his timepieces as his high-octane exploits. Indeed, we’ve been enjoying following the evolution of his luxury watch style recently here at Leonard Dews – so here are four of our particular favourites!

Within the James Bond universe, it’s notable for being the first watch that was specially modified and loaned to Sean Connery’s Bond by Q branch. Compared to the increasingly advanced (and deadly) capabilities of later Q’s projects, this one was actually relatively straightforward as Bond watches go, but the Quartermaster was still noticeably proud as he presented it: “Here we have a geiger counter. Useful and unobtrusive… and it’s waterproof, of course.”

(Although we should probably note that Q is safe to use that descriptor because he’s a fictional inventor working in the 1960s. You won’t hear that term used to describe real luxury watches – we say they’re water resistant instead.)

Here’s the interesting bit – after filming of Thunderball wrapped, the prop went missing for nearly half a century. Today, the prevailing theory is that it was surreptitiously swiped by someone working at Pinewood studios, where the film was made. It eventually popped up at a car boot, of all places, in 2013, where an enterprising buyer purchased it for £25. It was later sold for more than £100,000 at auction – which just goes to show that contrary to what people say, you can indeed find some great bargains at these things.

In case you’re wondering, sadly it apparently doesn’t actually function as a geiger counter. In fact, some eagle-eyed experts think that the design of the case might actually prevent the chronograph or winding function from being activated, so it’s more highly prized for its film pedigree than for its practical value. We think you’ll agree though – that film pedigree is quite enough!

As we’ve touched on already, Bond is known for his OMEGAs and his Rolexes, and even one or two Seikos, but he’s rarely been seen with a TAG Heuer on his wrist – with one exception. In the 1987 film the Living Daylights, Timothy Dalton’s Bond wore a TAG Heuer Night Diver, reference 980.031. It’s a mid-size PVD dive watch with a luminous dial, which contrasts nicely with its black case and bracelet.

Just as with the Top Time, the Night Diver’s legacy is mostly defined by mystery and intrigue. Though it was widely identified as a TAG Heuer not long after the film’s release, the exact model remained unknown for decades, until the team at jamesbondwatches.com scrutinised 10 seconds of fast-paced footage, breaking it down frame by frame until they were finally able to narrow it down to the 980.031.

Even though it’s finally been identified though, there are still plenty of questions surrounding Bond’s only TAG Heuer to date. For example, nobody knows whether it’s technically a Heuer or a TAG Heuer, since the film began production in 1986, just after the merger between the two companies. And true to its elusive nature, it appears to have been lost to history, just as the Top Time was before it. Maybe it will one day resurface in an unequally unlikely place – but right now, who’s to say?

Both Pierce Brosnan and the OMEGA Seamaster made their debut in 1995’s GoldenEye, which – as we’re sure you know already – marked the start of a long and prestigious partnership between two super-suave icons. The luxury watch in question was a blue-bezel Seamaster Diver 300m. It was personally selected by Oscar winning designer Lindy Hemming, who explained her reasoning thus: “Commander Bond, a naval man, a diver and a discreet gentleman of the world, would wear the Seamaster with the blue dial.” It’s hard to argue with that! 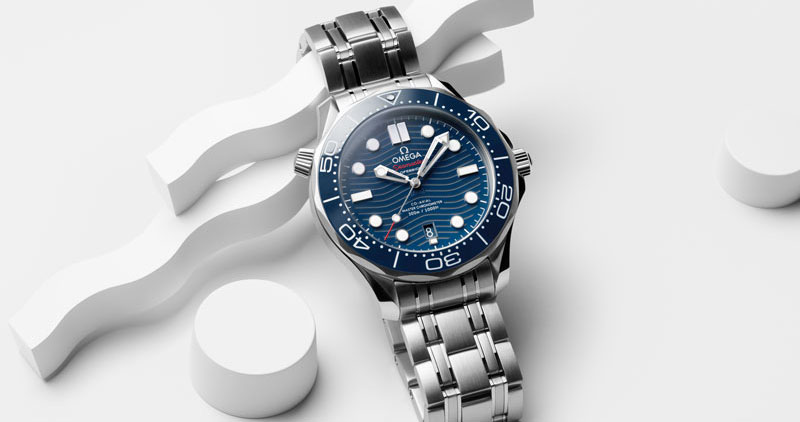 Plus, it’s easy to see why the Seamaster made the shortlist. Its reputation for style, form and function is almost unparalleled, and it remains as highly sought-after today as it was at the time of its first release, back in 1948. In fact, it was OMEGA’s first family of watches, and it’s widely regarded today as the quintessential drive watch. It has an excellent heritage, a timeless design, and outstanding performance – much like the man himself. Dressy but practical, it’s a fitting tool for the adventurous Bond, who’s liable to find himself in all manner of extreme environments and sticky situations.

Speaking of which, the Brosnan era was famous – or notorious, depending on your perspective – for venturing into progressively more outlandish territory with its plot, characters, and gadgets (especially in Die Another Day). That was a trend that eventually encompassed the OMEGA, too, as it served as a vehicle for Bond’s increasingly ludicrous secret weapons, including a laser, grappling hook, and mine detonator. Make no mistake, it all sounds very cool, but in reality, ‘detonator’ is probably not a descriptor you’d really like applied to something you wear around your wrist. The Seamaster models you’ll find in our range here at Leonard Dews are all impressive enough without!

After the invisible cars and ice palaces of Pierce Brosnan’s last outing, Daniel Craig’s casting in Casino Royale represented a return to the series roots, resetting its canon and aiming for a more realistic tone. Even Q’s high-tech gadgets were more restrained, comprising only a radio beacon and a Walther PPK, hand-coded so that it could only be fired by Bond. In keeping with this pared-back vibe, Bond’s watch in this film is thankfully spared from the high-tech treatment, leaving it to stand on its own.

His timepiece of choice for the titular Casino Royale is a Seamaster Planet Ocean. It’s a little bigger, a little burlier, and a little more rugged than some of its predecessors, making it the perfect fit for Daniel Craig, who brings a slightly darker edge to his portrayal of the legendary spy. (Interestingly, it serves as an especially neat contrast to Bosnian’s blue-dial Seamaster, which equally reflected the lighter and easier charm that the Irish actor embodied in the role.)

What’s great about the Planet Ocean is that while it may have lacked overt gadgetry, its real-life qualities still ensured that it made in-universe sense as the timepiece of choice for the globetrotting Bond. Its OMEGA 8900 is a 2-barrel movement that’s been officially certified by METAS (the Swiss Federal Institute of Metrology), attesting to its superior precision, magnetic resistance, and a longer life on the wind. 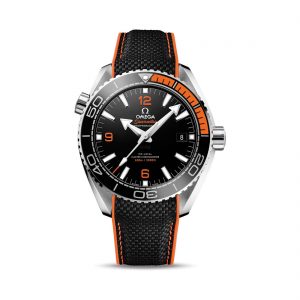 Plus, as opposed to its 300m contemporary, the Planet Ocean Seamaster boasts 600m, or 2000ft of water resistance, giving it impeccable prestige as a diving watch. Its face sports orange accents for easy legibility at darker depths, and its rubber strap employs a clasp that ensures it can easily fit over a diving suit. Craig’s Bond seems to rarely wear one of these, but he does have a penchant for engaging in high-octane firefights while standing on brittle sheets of ice, so they’re all qualities that serve him well over the series.

Of course, these are just a few that captured our imaginations here at Leonard Dews. But with 27 films in total throughout the franchise, we’re sure that you’ll probably have one or two of your own, too. If the impeccable style of Bond’s TAG Heuer or OMEGA watches have caught your eye, you’ll be right at home in our Blackpool showroom – we’ve got a huge range of luxury watches from some of the world’s most prestigious brands, including Patek Philippe and Longines.