If you’ve had your eye on the horological headlines recently, you might have noticed one of OMEGA’s latest releases – the OMEGA CK 859. Though it might appear unassuming at first glance, that understated appearance belies a fascinatingly complex interior, presented with distinctively traditional charm. And of course, as with all OMEGA’s watches, it embodies centuries of watchmaking heritage and prestige, so it’s not hard to see why it’s attracting the gazes of so many longstanding fans of the brand (not to mention its fair share of curious newcomers).

With several OMEGA CK 859s now in stock here at Leonard Dews, we’ve had plenty of time to appreciate them ourselves – here’s why we think you’ll love them just as much as we do! 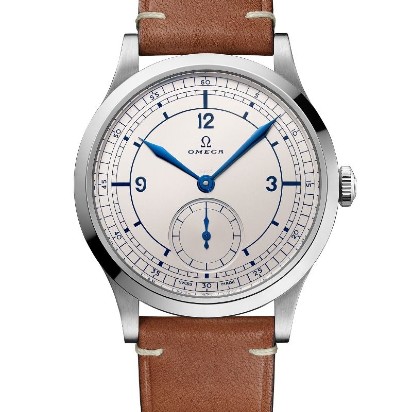 If you have a particularly in-depth knowledge of OMEGA’s history, the OMEGA CK 859 might look a bit familiar – it’s been inspired by a classic 1939 OMEGA wristwatch, which itself housed the 30-T2 manual-winding seconds calibre. Like its inspiration, the CK 859 utilises a manual mechanical movement – specifically OMEGA’s Calibre 8926, notable for its 72 hours of power reserve from dual barrels, free-sprung balance, and OMEGA’s Co-Axial escapement.

The watch is 39mm wide with a stainless steel case and 20mm lugs. One of the first things you’ll probably spot from a quick glance at it is that it has a lovely 1930s-inspired sector dial that’s made from Ag 925 silver. That tone of silver is complemented nicely by its blue steel hands, and an anti-reflective sapphire crystal on both sides.

The OMEGA CK 859 boasts 30m of water resistance, but as you may well already know, that doesn’t mean it can be taken underwater. Quite the opposite – it’ll probably withstand being splashed occasionally, and you won’t have to hide it under your coat in the rain, but short of that you’re best off keeping it out of water entirely. (If this sounds confusing, don’t worry – it is. We’ve cleared things up as best we can in our post on water resistance.)

All told, the OMEGA CK 859 is a beautifully understated piece of old-school design, hearkening back to a much-loved era of OMEGA’s watchmaking history, while incorporating some of the most sophisticated watchmaking techniques and technology around today.

Take your pick! We’re huge fans of the classically-minded design, but perhaps one of our favourite aspects of this watch is a little more subtle. The CK 859 hasn’t been specifically limited by OMEGA, but it’s still being produced in a serially numbered edition. In other words, every watch is being individually numbered in the order in which it’s been manufactured, adding a nice touch of exclusivity to an already classy timepiece.

It’s also a METAS-certified Master Chronometer, and as such the mechanism is capable of withstanding magnetic fields of up to 15,000 gauss. (That’s about as strong as the fields you’ll find in an MRI machine – or in other words, a field that’s easily strong enough to pick up small objects from quite some distance away.)

There’s also a nice bit of visual intrigue through its sapphire crystal caseback, which shows a beautifully detailed view of the movement architecture and the finishing, including its rhodium plating and arabesque Geneva waves.

There’s also a nice bit of visual intrigue through its sapphire crystal caseback, which shows a beautifully detailed view of the movement architecture and the finishing, including its rhodium plating and arabesque Geneva waves.

Those are just our favourites though – who knows, you might have one or two of your own! You can discover them with the OMEGA CK 859 references right here in our Blackpool showroom, along with a huge range of brand new luxury watches from a variety of leading brands, including not just OMEGA, but also TAG Heuer, Patek Philippe, and Longines.

And if you ever need some extra help or advice, don’t hesitate to ask us right here at Leonard Dews. Our friendly experts will be only too happy to provide you with as much or as little help as you need!