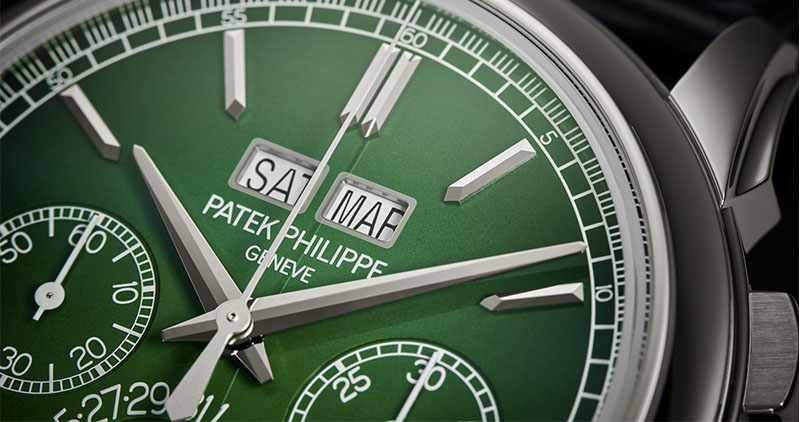 It’s not for nothing that Patek Philippe is widely regarded as one of the most prestigious watchmakers on the face of the planet. Now with more than 180 years of history behind it, the company has shown exceptional aptitude for evolving its designs to keep pace with modern tastes and design sensibilities, and its technological ingenuity is almost unrivalled.

Patek has reaffirmed those credentials with the release of its latest luxury watches for 2022, which includes three new World Timers. Here, we’re taking a closer look at some of the most intriguing timepieces to have caught our eye at Leonard Dews! 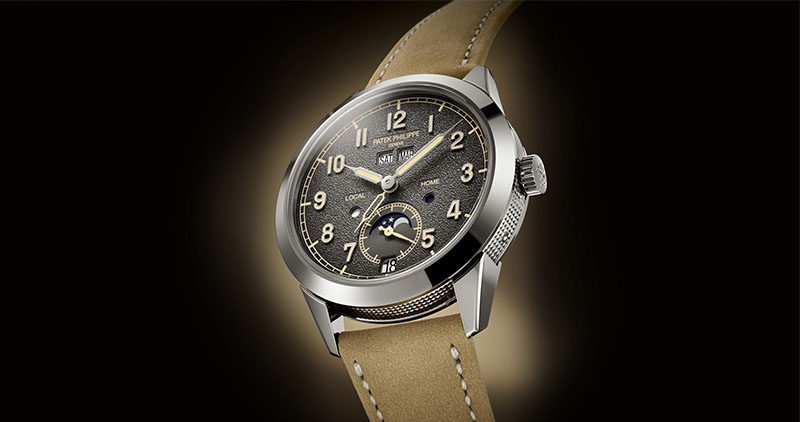 The very first watch on our roundup is a masterful blend of vintage style and pioneering, cutting-edge technology.

Seasoned connoisseurs of Patek Philippe timepieces will probably be able to tell from a glance that the design of the 5326G-001 was inspired by none other than Patek’s peerless Calatrava collection, especially with its distinctive round case and earthy tones of brown, charcoal and black. Indeed, its highly textured charcoal grey background hosts Arabic numerals and syringe hands, giving it a tangibly old-school vibe akin to a classic pilot’s watch. What’s more, its slightly grainy texture is reminiscent of antique cameras.

But though its outward style may have been inspired by decades gone by, the technology in that simple round case is nothing less than state-of-the-art. In fact, the Patek Philippe 5326G-001 is the very first watch to combine the patented Annual Calendar and Travel Time display system, both signature complications of the brand.

It’s an incredible technological achievement, and one that required the engineers at Patek Philippe to develop a unique self-winding movement, with a Travel Time mechanism controlling the Annual Calendar, allowing the wearer to correct the date in both forwards and backwards directions.

All that combines to make the Patek Philippe 5326G-001 a highly impressive, functional and elegant daily wear watch. 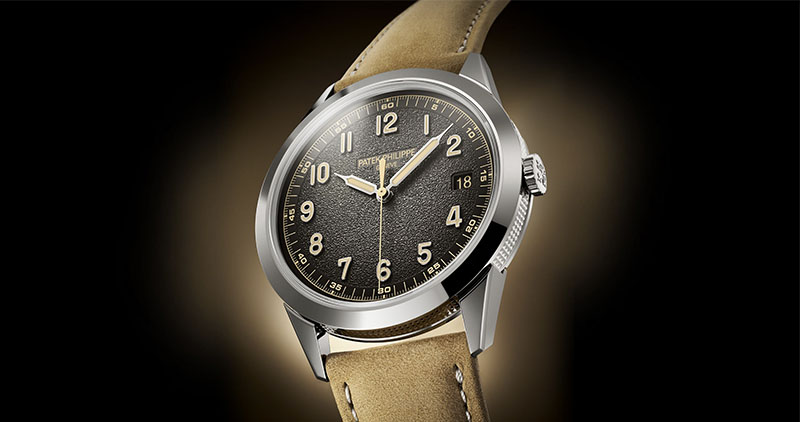 Sharing the refined appearance of its sibling, the Patek Philippe 5526G-001 also sports that beautifully round case that’s always distinguished each and every Calatrava model, with a cleaner, textured grainy dial that carefully evokes the feel of antique cameras.

As the latest addition to the historic Calatrava collection, the 5526G is notable for its distinctive case construction, which uses the lugs as an integral part of the case back. Its flanks are also decorated a Clous de Paris hobnail pattern, typical of the Manufacture, and a guilloched motif that continues all around the entire case-band.

It’s powered by a self-winding Caliber 26-330 S C, which powers the hours, minutes, central seconds, aperture-type date and stop-seconds mechanism. You can take your pick from two interchangeable straps, depending on which one takes your fancy – the beige calfskin with the nubuck finish or the black calfskin with an embossed fabric motif and beige topstitching. 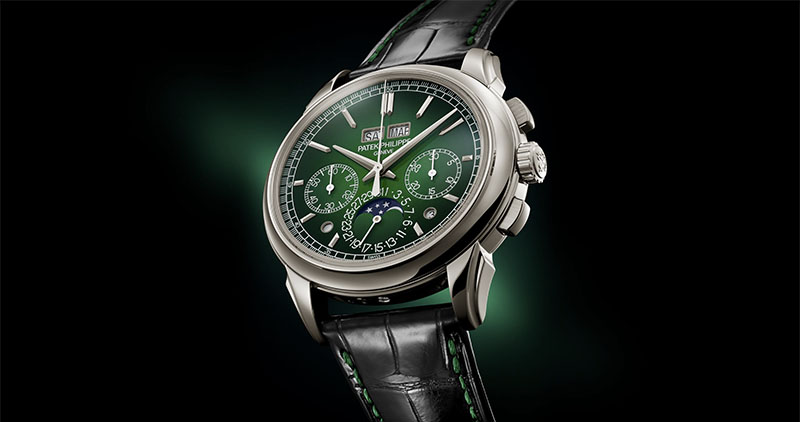 There can be no doubt that the 5270P-014 Grand Complication is a truly entrancing sight. The first iteration was launched back in 2011, and today this latest generation distinguishes itself with a captivating lacquered green dial, made all the more dramatic by its black-gradient rim and gold applied hour markers.

That gives this Grand Complication a noticeably more contemporary aesthetic than some of its predecessors. The contemporary vibe is enhanced by the sheer luxuriousness of its case, which has been delicately crafted from platinum – one of the most precious metals in the world of watchmaking, but one of the most notoriously challenging to work with. (Thankfully, Patek Philippe’s talented artisans are more than up to the task!)

As the newest reference in a historic collection of perpetual calendar chronographs, the 5270P-014 Grand Complication boasts a truly astounding array of six chronograph complications, complemented by a slim calendar mechanism. And of course, each component has been lovingly finished by hand. It truly is a watch like no other. 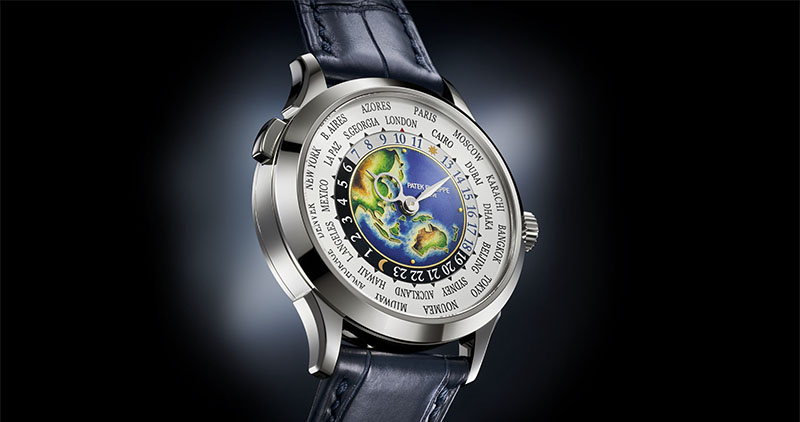 The World Time collection is one of Patek’s most beloved collections, and it’s been a favourite for globetrotting connoisseurs ever since Patek Philippe first debuted the very first model in partnership with acclaimed visionary Louis Cottier, all the way back in 1937. The 5231G-001 has a storied legacy to live up to, but it does so with aplomb.

Traditionally, one of the most distinctive features of World Time watches have been the Grand Feu cloisonné enamel maps on their dials, offering a bird’s-eye view of various continents and regions. The 5231G-001 is no different, turning the viewer’s eye on South-East Asia and Oceana, with four gold spangles. Its dial is also adorned with the names of 24 cities around the world, to denote 24 separate time zones. What’s more, the 5231G-001 features a day / night indication for each one, re-emphasising its credentials as the perfect timepiece for keen travellers and jet-setters. 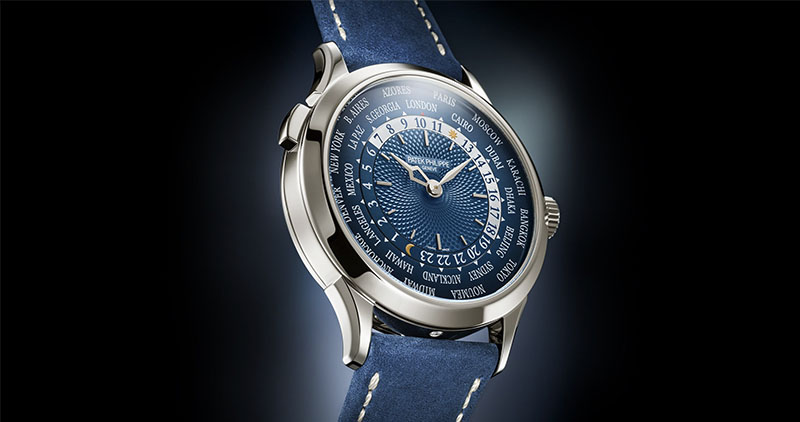 The reference 5230 was first introduced to the world in 2016, but for its 2022 release, Patek Philippe has chosen a deep blue shade for both its dial and strap, combined with a beautifully fitting platinum case. It’s a strong testament to the notion that blue is rapidly becoming the colour of the moment for luxury watches, and it’s especially apt for a World Timer, evoking boundless skies and sprawling oceans – both familiar sights to keen globetrotters.

Like its contemporary 5231G-001, the 5230P-001’s dial is decorated with 24-hour day / night indications for 24 cities around the world, and features a new circular guilloched motif, with gold applied hour markers. It also utilises an intriguingly clever mechanism that Patek Philippe patented at the turn of the century, allowing the wearer to correct all the World Time displays in one hour increments, simply by pressing the pusher at the 10 o’clock position. 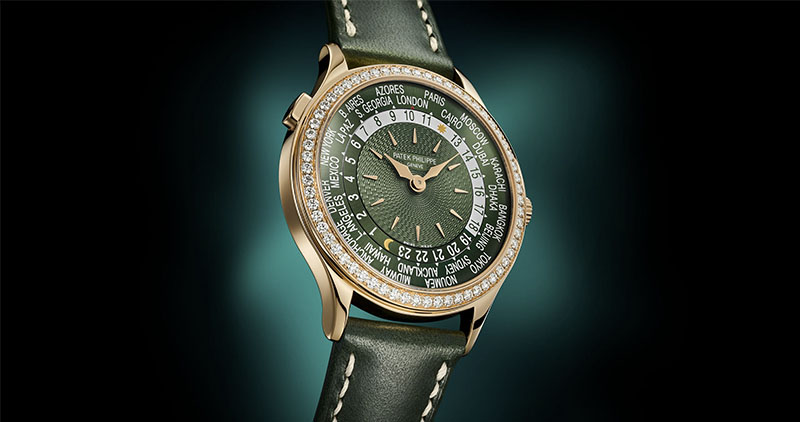 Patek Philippe’s final new addition to its World Time collection is the 7130R-014. For its first ladies’ World Timer, Patek Philippe has chosen a sophisticated olive green colour, drawing the eye with a hand-guilloched ivory-opaline dial. Its splendid rose-gold case is distinguished by a subtly sparkling bezel, which has been inset with 62 diamonds, while its sapphire-crystal case-back offers a fascinating glimpse of its automatic Caliber 240 HU movement.

As well as embodying all the refinement and technological ingenuity inherent to all automatic movements, this self-winding Caliber 240 HU is notable for being extremely thin, enabling the entire luxury watch to maintain a peerlessly elegant slimline profile. And of course, it proudly displays the characteristic city disc shared by all Patek Philippe’s World-Timers, simultaneously displaying the time across 24 time zones across the globe. It’s the quintessential timepiece for a lady of culture, and the perfect companion for those always chasing the sun. 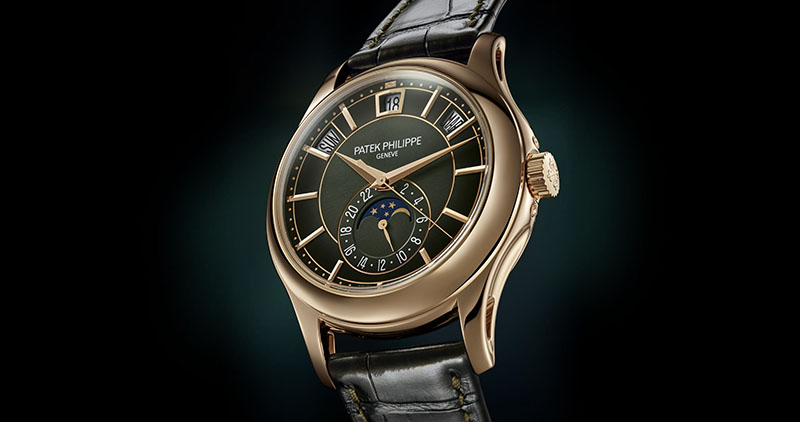 We couldn’t finish without giving an honourable mention to the 5205R-011 Complications. It’s another highly sought-after piece that features Patek Philippe’s Annual Calendar mechanism. In contrast to its already established sibling, the Blue Sunburst 5205G, the 5205R-011 has an altogether more contemporary feel, rooted in the smart look of its olive green dial, rose-gold hollowed flanks, and skeletonised lugs. It’s a brand new take on a model that’s enjoyed consistent success ever since its first release in 2010, and one that promises to be just as treasured by a new generation of luxury watch connoisseurs.

Don’t forget, our roundup of these new releases is only intended to provide a quick overview of the aesthetics and capabilities of each Patek Philippe watch, so if you’re curious to find out more about any individual one, we’re here to help at Leonard Dews.

We are an Authorised Retailer of Patek Philippe timepieces, so you’ll find plenty to explore both on our website and in our Blackpool showroom, alongside pieces from similarly prestigious manufacturers like TAG Heuer, OMEGA, and Longines. If you’ve got any questions or need any advice, don’t hesitate to give us a call on 01253 754 940, or feel free to ask one of our experts in our showroom, and we’ll be happy to provide as much or as little help as you might need.