Few watch manufacturers command the level of global respect and prestige that Patek Philippe has accumulated over the centuries, so it’s no surprise that its three latest luxury watches are already attracting widespread attention.

Ever since its inception in 1839, the brand has built an unrivalled global reputation on its ability to craft dress watches with incredible precision, creative vision and artistic flair. Those traditional design sensibilities have tangibly influenced the design of each of its new chronograph complications, which have already been described as contemporary takes on some of the brand’s most patrician watches.

Notably, the new releases have expanded the presence of green dials in Patek Philippe’s offering, and all three serve as a timely reminder why of the company is still considered to be one of the single most prestigious watchmakers in the world today.

Patek Philippe has proudly announced that this first timepiece “renews the style of the much sought-after Grand Complication”, and personally here at Leonard Dews, we’d be hard pressed to disagree! The split-seconds (‘rapptrapante’) chronograph perpetual calendar marries two world-famous Patek Philippe complications that are highly prized by discerning connoisseurs. These have been artfully combined with a dizzying array of horological innovations (seven in total), including an instantaneous 30-minute counter, moon phases, and small seconds on its dial. It all makes the 5204R-011 a marvel of technological ingenuity, a perfect example of what the world-class artisans at Patek Philippe are capable of producing. 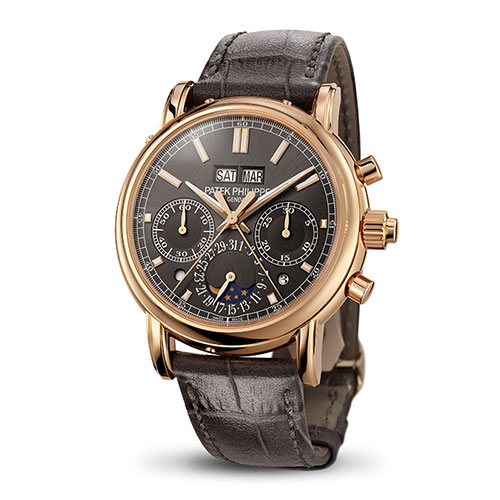 The company has released two versions of the 5204 in rose gold in recent years, and the 5204R-011 iterates further on those designs by combining a rose gold case with a harmoniously balanced, slate-grey dial, complete with gold applied hour markers, all rounded off with a calf leather strap. The transparent sapphire casebook reveals the fascinatingly intricate workings of its manual movement, the caliber CHR 29-535 PS Q, the insight serving to further underscore the watch’s credentials as a magnificent technological achievement, and spectacular work of art.

The annual calendar chronograph was invented in-house at Patek Philippe more than 25 years ago, and ever since then it’s been continually regarded as one of the rarest but most fascinating combinations in the world of horology. The appetite for it amongst buyers was clear to see when Patek Philippe released the platinum 5905 with a blue / black dial back in 2015, and again with a newer model in 2019, this time featuring a rose-gold case with a deep chocolate dial.

In contrast, Patek Philippe have made the intriguing decision to release this new 5905/1A-001 in stainless steel. Though we’ve been seeing more stainless steel models from Patek in recent years, it still remains a relatively rare choice of metal for the pioneering watchmaker. 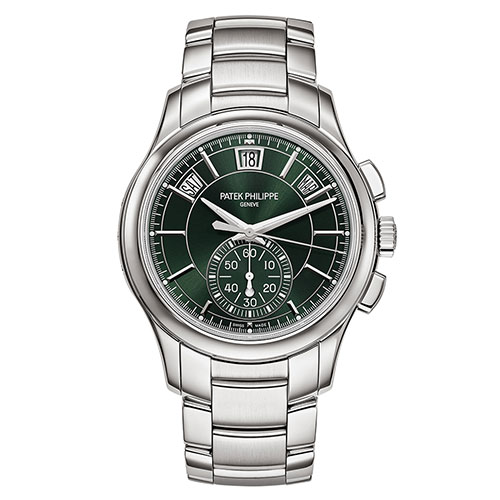 The 5905/1A is a self-winding (i.e. automatic) flyback chronograph with an annual calendar that, in the manufacturer’s words, offers a new interpretation of the 5905’s style, with its resolutely sporty look. Its three-link integrated bracelet is enhanced by contrasting polished and satin finishes, and the casual sunburst olive-green shade of its dial is neatly offset by its gold applied hour markers.

With its 42mm diameter and 14.3mm height, this is a notably large watch with heft and presence, a design that strikes the perfect balance between bold and casual. Its annual calendar automatically accounts for the 30-day and 31-day months, which means it only needs a single manual correction a year, on the 1st of March.

The 5905/1A is the quintessential embodiment of Patek Philippe’s somewhat unique adaptability, one that stays perfectly in tune to the desires of modern buyers, but without straying too far from the brand’s traditional sensibilities and distinctive creative vision. It’s a superb example of the brand’s approach to contemporary watch design.

The World Time has long been a signature complication for Patek Philippe, and this particular timepiece can trace its DNA all the way back to a unique luxury watch first released in 1940. The highly distinctive design of the watch in question went on to inspire the Patek Philippe World Time Chronograph, which was introduced in 2016. It captured the imaginations of buyers by combining the practicality of a chronograph function with that of a world timer, making it a particular favourite for travellers and adventurers. These two iconic complications have now been embodied in this latest release from Patek Philippe; a captivating platinum timepiece with a green-coloured dial.

The craftsmen at Patek Philippe have reinterpreted this iconic timepiece with what they call ‘a sporty and cosmopolitan spirit’. Like the 5390G before it, the 5930P certainly makes an unforgettable first impression, this time with the intensity of its platinum finish beautifully complemented by its green dial and shiny bottle-green alligator strap – distinguishing it clearly from its white-gold sibling. 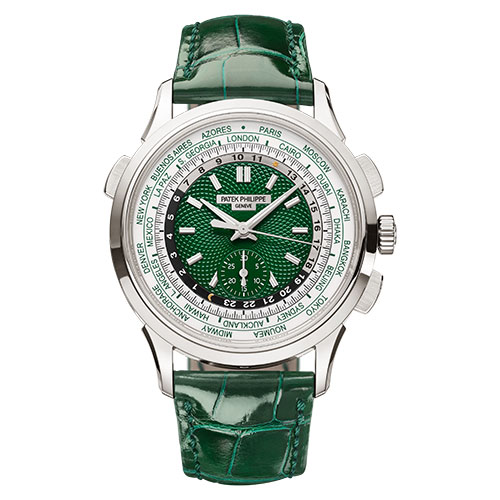 As you’d expect, the watch’s bold, intrepid personality is underpinned by no small amount of horological brilliance, all powered by a cutting-edge self-winding (automatic) movement. The world time flyback chronograph features a central chronograph seconds hand – which has been paired with Dauphine-style hour and minute hands – and there’s a 30 minute counter at the 6 o’clock position.

In fact, just a brief glance at its green dial illustrates Patek Philippe’s widely-hailed fine craftsmanship skills, particularly in its hand-applied circular guilloché pattern, with its applied gold hour indices. The World Time function simultaneously displays the time in all 24 time zones; the dial’s outer ring clearly distinguishes every one, with the names of their corresponding cities printed in green.

There are three pushers spread evenly around the case band, one for the world timer display, and two for the flyback chronograph. The 5930P also utilises an exclusive patented mechanism that enables the correction of all displays, simply by pressing the 10 o’clock pusher.

It’s all contained in a compact case with a modest diameter of 39.5mm and 12.86 in height – particularly impressive given the complexity and ambition of its features.

These latest stunning pieces are worthy additions to Patek Philippe’s unrivalled collections, and they’ll join a magnificent range of the manufacturer’s luxury watches here at Leonard Dews. We are an Authorised Retailer of Patek Philippe timepieces, so you’ll find plenty to explore both on our website and in our Blackpool showroom, alongside pieces from similarly prestigious manufacturers like TAG Heuer, OMEGA, and Longines. Don’t forget that if you ever need any help or advice, that’s exactly what our experts are here for! If you’ve got any questions or need any advice, don’t hesitate to give us a call on 01253 754 940.