Our top picks of the 4 best men’s Longines watches 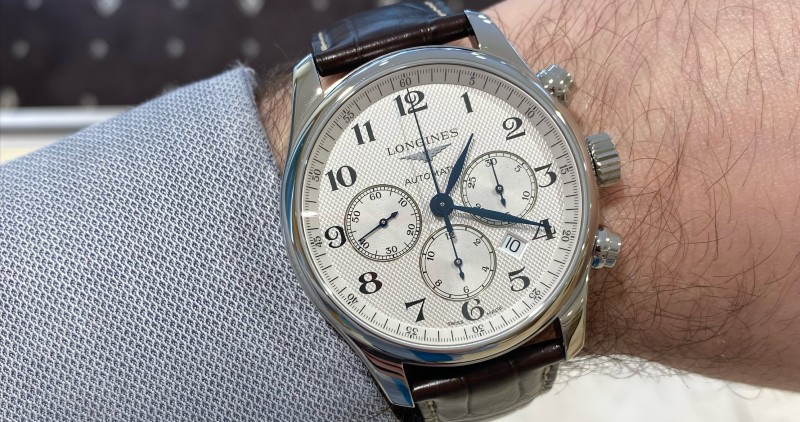 You don’t need to be a connoisseur of luxury watches to have heard of Longines. It’s one of the most prestigious Swiss watch manufacturers in the world, with a history spanning all the way back to 1832, giving it almost two centuries of experience and expertise. As you’d expect, over the course of those two hundred years, Longines has become a true force to be reckoned with in the world of luxury watches, and today it’s rivalled only by some of its fellow Swiss watchmakers, such as TAG Heuer, Omega, and Patek Philippe. 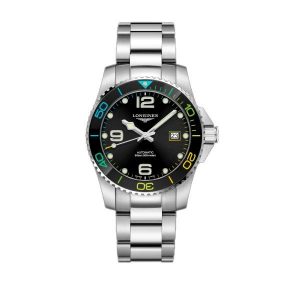 The HydroConquest XXII Commonwealth Games is a stunning new limited edition addition to its legendary HydroConquest collection. Longines has the distinction of having been named the Official Partner and Timekeeper for the Commonwealth Games, and its experts have designed this latest timepiece to honour the tradition and spirit of the games, which see athletes from over 70 Commonwealth nations and territories competing.

Amongst its most distinctive features are the vivid colours of its event logo, with the vibrant blue, yellow and green shades standing out on its black ceramic bezel, and on the minute track of its black sunray dial. On the other side of the watch, the case-back is engraved with the Birmingham 2022 logo, and the words “Limited Edition – 1 out of 2022”, alluding to the fact that only exactly that many will ever be produced.

The XXII Commonwealth Games watch relies on an exclusive self-winding movement with 72 hours of power reserve, and retains all the same key qualities that have long made every watch in the HydroConquest such a beloved choice for divers, sailors and watersports enthusiasts the world over – including its famous durability and strong construction, its 300m water resistance, unidirectional rotating bezel, screw down crown and case back, and double security folding clasp with an integrated diving extension piece.

All in all, it’s high-class, high-performance, and a fitting tribute to one of the world’s greatest sporting events.

Longines’ storied relationship with the aviation industry began about 100 years ago, when its timepieces rapidly became the go-to choice for military pilots, casual aviators, and even high-profile pioneers like the late Howard Hughes. The artisans at Longines are rightfully proud of that history, and in recent years it’s been honouring its aviation links by reinventing some of its classic watches for the modern age. 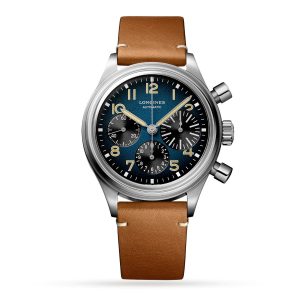 This watch is a prime example – the Longines Avigation Bigeye Titanium 41 Chronograph. A reimagining of the original 1930s design, the newest version is now available in a lightweight titanium case, with a petrol blue dial.

It bears all the distinctive hallmarks of classic pilot watches, and you can still clearly discern the principles that guided its original design; legibility, reliability and durability were of paramount importance on the battlefield, where split-second timings and quick decision-making could literally make the difference between life and death.

Obviously though, this latest iteration is unlikely to be worn in quite such intensive environments, so the craftsmen at Longines have given a greater focus to its aesthetics and style. The rich petrol-blue gradient dial is beautifully offset by a deep brown calf leather strap, draws the eye with an intriguing tri-counter layout, complete with luminous Arabic numerals and oversized minute counter.

The entire timepiece is powered by the L688 Calibre, a chronograph movement exclusive to Longines, fitted with a silicon balance spring. With vintage inspired pilot’s chronograph design, reliable self-winding movement, and accessibility for newcomers and connoisseurs alike, it’s not hard to see why the Longines Avigation Bigeye has earned itself such a treasured place in the hearts of so many buyers. 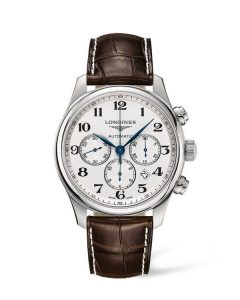 An impeccable fusion of modern and traditional, the Longines Master Collection Steel 44mm Automatic Chronograph Watch is (as the name suggests) part of the Master Collection. It’s long been one of Longines’ most revered collections, perfectly embodying the Swiss manufacturer’s skill at melding classical elegant designs with truly cutting-edge technology.

Those traditional design sensibilities are neatly encapsulated by its traditional round stainless steel case, as well as its beautiful silver barleycorn dial with painted Roman numerals and blue steel hands. The shade of the dial is nicely offset by a brown alligator strap, which itself is secured with a triple safety folding clasp and push piece opening mechanism.

All told, it’s a magnificent testament to the ingenuity, creativity, and sheer class of Longines.

As you’ve probably already surmised, the Longines Heritage Military 1938 Limited Edition shares much of the same DNA as the Avigation Bigeye timepiece we’ve covered above. Like the Bigeye, it’s a reimagining of an original design that was built with reliability, accuracy and legibility in mind, and you can still see this underlying ethos in each of the various design elements, including the classic subsidiary dial at 6 o’clock, large legible numerals, and smooth black dial. 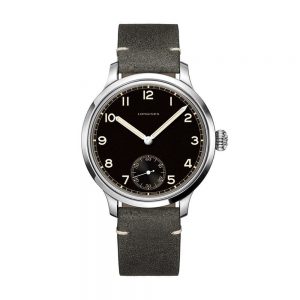 There’s also beauty in the little details too, such as the era-authentic crown at 9 o’clock, intricately moulded into the classic ‘sea urchin’ shape. It’s this crown that’s used to wind the (of course) in-house L507 – an incredibly sophisticated manual mechanical movement, which is again in-keeping with the watch’s authentic counterparts of the time. Automatic watches were enjoying a resurgence, but they were still prohibitively expensive for plenty of soldiers (even officers), so manual watches would still have been the preferred choice for combatants on many of the main fronts. And quartz watches, of course, were still a long way off!

It all contributes to a timeless and understated design, making the Longines Heritage Military 1938 Limited Edition both a practical, durable timepiece, and a fascinating glimpse back into one of the most decisive periods in human history.

This is just a small sample of our personal favourite Longines mens watches – you may well have some of your own! You can discover them all right here on our website, or pay us a visit in our Blackpool showroom, where one of our friendly team will be only too happy to help you take the next step on your buying journey. And if you’ve got any questions or need any advice, don’t hesitate to give us a call on 01253 754 940. We’re here to help!