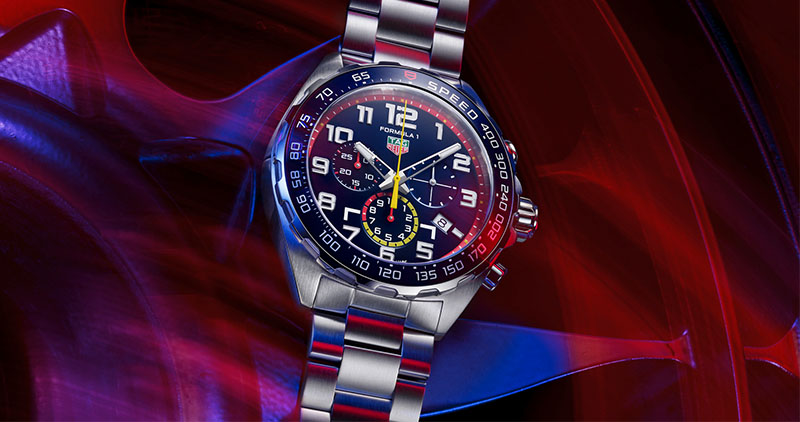 TAG Heuer’s latest release marks the newest development in its long association with the world of motorsport, one that now spans more than half a century. (We’ve even discussed it in quite some detail here before at Leonard Dews.) Now, for only the second time in TAG Heuer and Red Bull Racing’s shared history, the fabled Swiss manufacturer has unveiled a special edition timepiece designed to pay tribute to its ongoing alliance with the championship winning team.

The TAG Heuer x Red Bull Formula 1 certainly isn’t for the faint of heart. It effortlessly embodies the idea of performance, ambition and heart-racing energy, making this chronograph just as dynamic and self-assured as the team it celebrates.

So then – let’s take a look under the bonnet, shall we?

The designers of TAG Heuer consulted extensively with the Red Bull Racing team to co-create this intriguing timepiece, notably using the graphic codes of the official Formula One team. The result is a characteristic design that exudes fearlessness and high-performance precision in equal measure – both qualities often associated with both its co-creators.

Its 43mm steel case houses a blue sun-brushed dial, with Arabic numeral indexes that are directly inspired by racing speedometers in Formula One cockpits, complete with a sleek black-filled chronograph counters laid out in the 3 o’clock, 6 o’clock, and 9 o’clock positions. These measure small seconds, 1/10th of a second and 30-minute functions respectively. The customised minuterie features its own distinctive touches of red and yellow, the latter shade having also been chosen to highlight the central chronograph seconds hand. There’s just about room for a date window complication, neatly slotted in at 4 o’clock. 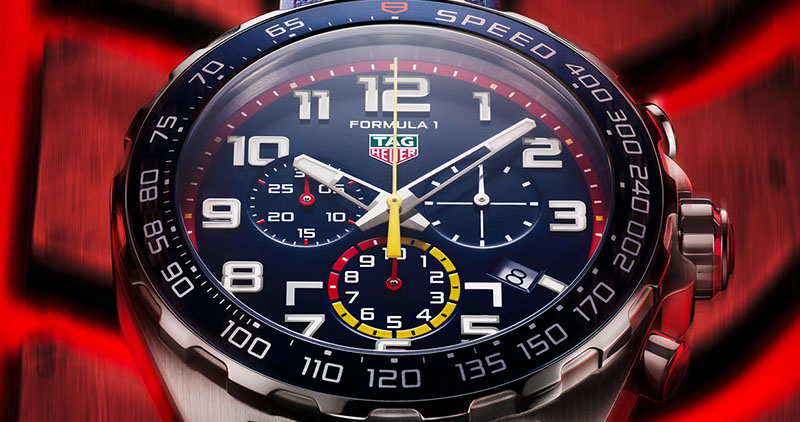 For such a vibrant luxury watch, it also has some pleasingly subtle elements to its design – eagle eyed motorsports fans might notice the angled lines above the five and seven numerals, designed to emulate the appearance of a classic Formula One starting grid. Slightly less subtle is the word SPEED engraved on the bezel at 1 o’clock, right next to the red silhouette of the TAG Heuer emblem, sitting pride of place in the 12 o’clock position. The TAG Heuer Formula 1 Red Bull Racing Special Edition has three round pushers, one of which is highlighted with a red lacquer outline to distinguish it as the chronograph start pusher at 2 o’clock.

Flip the watch over (carefully, of course), and you’ll find the words “Red Bull Racing Formula One Team Special Edition” lovingly engraved onto the caseback, which deftly combines the logos of the Red Bull Racing Team and TAG Heuer’s, emblazoned on a chequered flag background. 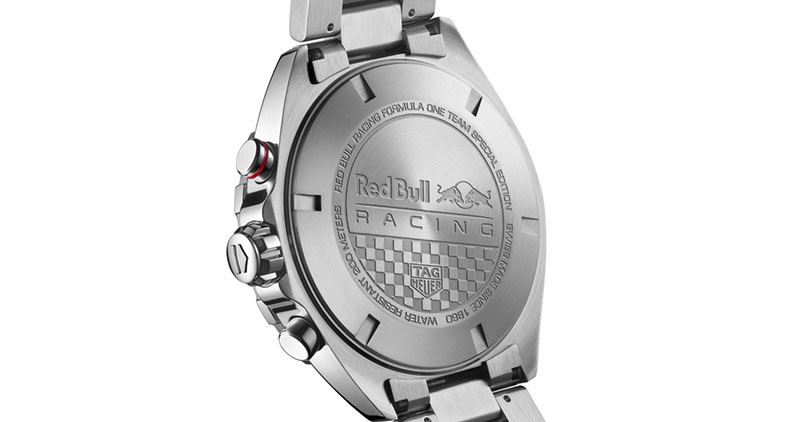 The TAG Heuer Formula 1 Red Bull Racing Special Edition is available in two references, depending on whether you prefer a sporty vibe with a blue rubber strap, or a more elegant finish with a stainless steel bracelet. The watch is powered by a precision quartz movement, and in case you’re wondering, it’s water resistant down to 200 metres. (But we’ll wager yours will spend more of its time trackside rather than beneath the deep blue waves!)

A finely-engineered product of a high-octane legacy

The TAG Heuer Formula 1 Red Bull Racing Special Edition entwines several rich legacies, and its genesis can be traced all the way back to the middle of the 20th century. At the time, Heuer (as it was known back then) had already established a name for itself as a manufacturer of timing devices for the automotive industry, including Formula One. In 1968, its president Jack Heuer signed a landmark sponsorship deal with another Swiss icon, racing driver Jo Siffert.

From that point onwards, TAG Heuer timepieces became the watches of choice for a significant number of Formula One drivers, including the legendary Ayrton Senna. The Brazilian driver ultimately became one of TAG Heuer’s most high-profile ambassadors, and the company later designed a luxury watch in his honour.

The latest TAG Heuer Formula 1 Red Bull Racing Special Edition is part of the watchmaker’s Formula One watch collection, which was launched in the 1980s specifically to pay tribute to its extraordinary and ongoing association with the competition. Fast forward to 2016, and TAG Heuer successfully became the official partner and timekeeper of the Red Bull Racing Formula 1 team, joining them to celebrate all their most distinguished successes in recent years. That includes Max Verstappen’s outstanding victory in the final race of the 2021, earning him the World Drivers’ Championship. 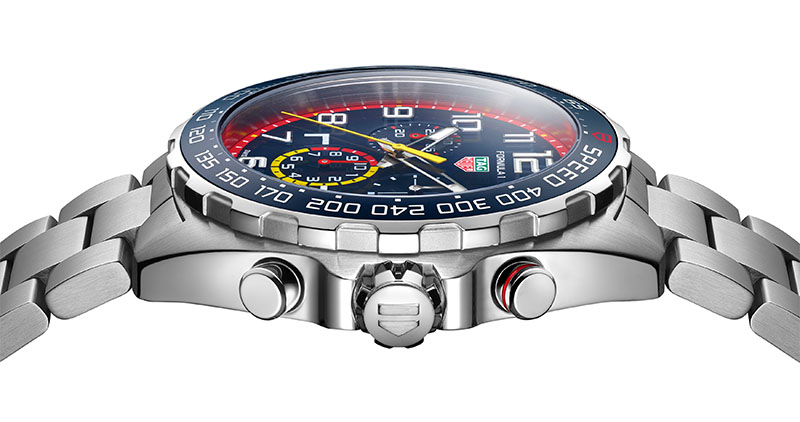 As you’d expect, the Red Bull Racing team wears TAG Heuer watches both on and off the track. The question is – will you?

If the TAG Heuer Formula 1 Red Bull Racing Special Edition has captured your attention, we’ve got good news for you – we’ve already got the stainless steel bracelet in stock in our showroom here at Leonard Dews. And if you’ve got any questions or need any advice, our experts are always here to help. With more than 140 years of history behind us, you can count on us to have all the passion, specialist expertise and knowledge we need to help you find the perfect watch for you. Feel free to pay us a visit, or give us a call on 01253 754940 and we’ll be happy to assist however we can!