Skeleton watches are one of the more intriguing types of luxury watch to have surged in popularity in recent years. And if you’ve ever seen one, you’ll probably know why! The pared-back design of skeleton watches allows onlookers to see right into the very beating heart of the watch, and revel in the mechanical ingenuity of its design. That fascinating design is complemented by an equally fascinating history; though skeleton watches are far from a new invention, they rose to prominence during a particularly decisive time for the luxury watch industry as a whole. Today, they remain highly sought after as unique statement pieces, especially by buyers who delight in the myriad complexities of watch mechanics.

So, let’s take a closer look, shall we?

What is a skeleton watch?

A skeleton watch is essentially a mechanical timepiece with a design that reveals some or all of its inner workings – typically through the front, the back, or in a small cut outlining the dial. Specifically, it offers a more detailed look at the watch’s movement, often fondly referred to as the engine, or the beating heart of the watch. Mechanical watch movements are either manual (requiring daily winding) or automatic (powered by the natural movement of the user’s wrist). Both are truly magnificent feats of mechanical engineering, and the design of skeleton watches allow wearers to fully appreciate all the intricacies and artistry of their design.

The ‘skeletonisation’ process also involves trimming away non-essential metal on the bridge, plate, wheel train and various other mechanical parts of the watch, paring it all back to the barest essentials required to keep the watch functioning. (The skeleton, if you will.)

Now, one of the strange things about skeleton watches is that while revealing the inner workings of the watch is undeniably captivating, a side effect of doing this is that it has the effect of making the design look quite busy. That can actually make it quite difficult to discern the position of the hands, and thus sometimes tricky to tell the actual time at a glance.

Initially, that might seem like it defeats the purpose of wearing a watch in the first place, but only if you judge the value of a watch primarily on its practical function. If anything, skeleton watches are physical embodiments of the industry’s gradual but seismic shift in design sensibilities over the past few decades.

In centuries gone by, telling time was almost universally regarded as the single most feature of a watch. Today though, there’s a widespread (if tacit) understanding that this aspect comprises just one facet of its overall design, and modern luxury watches are prized just as much for their aesthetics, provenance and style are they are for their timekeeping ability. Skeleton watches are the quintessential testament to that, serving as the ultimate statement pieces. 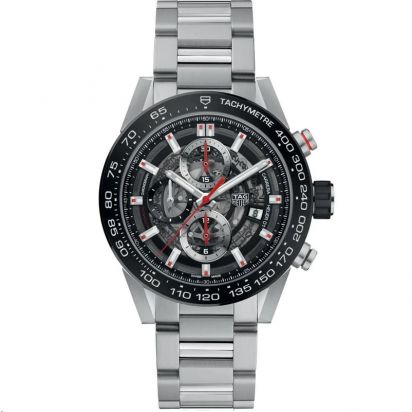 A short history of skeleton watches

Perhaps one of the most surprising things about this curious breed of luxury watch is that they’re a much older idea than you might think. In fact, the skeleton watch was invented by Frenchman André-Charles Caron all the way back in about 1760, making it roughly as old as the lever escapement. However, while skeleton watches have existed for quite a long time, they remained a relatively rare and obscure find for connoisseurs up until the 1970s – the time of the fabled Quartz Crisis.

Essentially, the Quartz Crisis was borne from the sudden explosion in popularity of electronic quartz watches. Up until then, most luxury watches had been relatively exclusive, handmade by talented artisans who’d honed their craft over decades. On the other hand, quartz watches were more widely affordable and laser-accurate, generally accurate to within a few seconds a year.

As a result, many luxury watch manufacturers, even the most prestigious, suddenly found their positions threatened by the influx of these new watches. Rather than relinquishing their positions or giving in and attempting to incorporate quartz movements into their designs, most of these manufacturers doubled down by focusing their efforts on designs that emphasised their long heritage, style, and craftsmanship.

Skeleton watches proved to be the perfect vehicle to showcase that sort of superiority, with their distinctive aesthetics and dizzyingly intricate mechanisms. Subsequently, world-famous names like Patek Philippe began more heavily re-investing in skeleton watches through the 1970s, and a number of other brands have followed suit. And with the renewed appetite for unique statement pieces amongst today’s collectors, it doesn’t look like luxury watches are going anywhere anytime soon.

If your own interest has been piqued by skeleton watches, it’s worth taking a look at our TAG HEUER Carrera Heuer01 Chronograph Automatic 43mm watch, with its black skeleton dial and exquisitely crafted automatic movement. Alternatively, you can take a look around the rest of our site, or explore our expansive Blackpool showroom, home to models from some of the world’s most prestigious manufacturers, including OMEGA, Longines, and TISSOT. If you can’t find exactly what you’re looking for, feel free to ask one of our friendly members of staff, or give us a call on 01253 754 940. We’re here to help!