How the co-axial escapement changed the face of watchmaking

To the layman’s ears, the co-axial escapement might not sound like the most intriguing concept known to man. But its modest name belies an impressive pedigree; in the world of horology, there’s no denying its impact as one of the single most groundbreaking innovations to come along in centuries. It’s also something of a point of pride for British luxury watch connoisseurs. After all, the co-axial escapement was invented by a British craftsman, one who ultimately left a legacy as one of the greatest watchmakers of the 20th century.

This is the story of his creation, and how it changed the world of luxury watches forever.

What is an escapement? The simple explanation

To give you a quick crash course in watch mechanics, an escapement is the device within a watch that converts rotational energy into lateral impulses. You already know that mechanical watches are powered by the release of kinetic energy from a coiled mainspring. The escapement is what regulates the release of that energy, using an oscillating motion to release it in small, fixed amounts. The gradual release of this energy is what moves the watch hands steadily across its face. Without an escapement, a wound manual watch would simply unwind immediately and uncontrollably as soon as you let go of the crown.

All this is what makes the escapement responsible for the ticking sound that you can hear when you hold the watch up to your ear, which goes some way to explaining why it’s often described as the ‘beating heart’ of mechanical watches.

Now, throughout horological history – a period which spans thousands of years – the number of widely-used escapements has remained in the single digits. In fact, only as few as five have seen any significant widespread use. One of the most recent of these is the lever escapement, although in this context, ‘recent’ is a very relative term! The lever escapement was invented all the way back in the mid-18th century, and it was such a pioneering device that even today, it remains the single most prevalent escapement in watches, clocks, and timers across the globe.

As such, it’s easy to see why so many horological experts and watchmakers regarded it as the gold standard when it came to escapements. But one watchmaker, one Dr George Daniels, questioned that assessment. During the Quartz Crisis of the 1970s, when the rapid explosion of quartz watches threatened to consume the mechanical watch industry entirely, Daniels accepted a commission from American industrialist Seth Atwood. The challenge, said Atwood, was to create a timepiece that would embody a fundamental improvement in mechanical watch performance.

The ultimate result was the co-axial escapement. 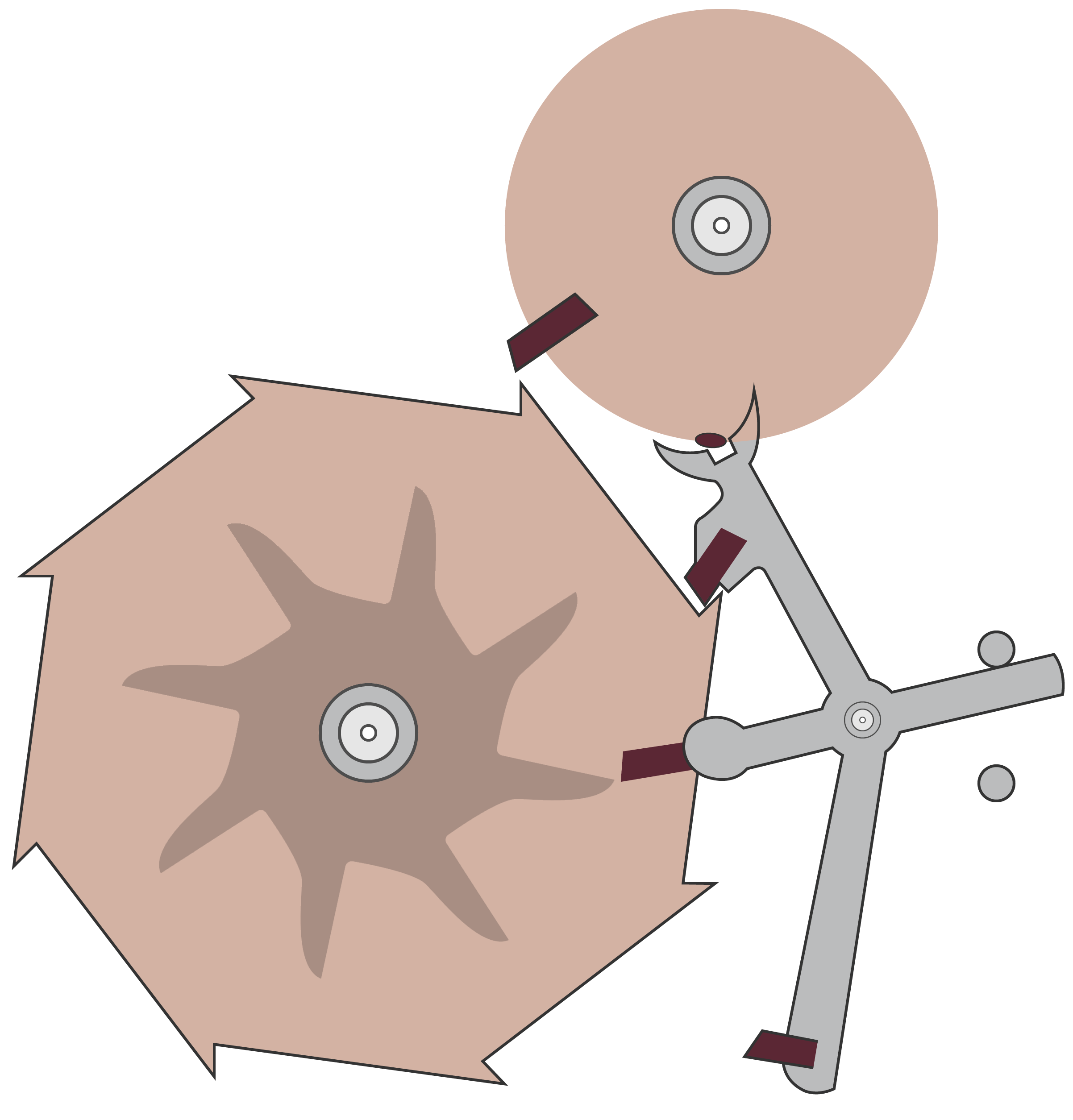 How does the co-axial escapement work?

The co-axial escapement builds on the strengths of the lever escapement while introducing significant improvements to its mechanical efficiency and operational lifespan, allowing the watch to go for much longer between services. Now, the reason why a lever escapement needs to be serviced comparatively more often is because its components slide against one another when they make contact. That’s not a fault of the design – it’s actually the method that the escapement uses to transfer power to the balance wheel, so it can bounce freely between impulses while simultaneously locking the mainspring. But eventually, this sliding friction causes natural wear, requiring regular lubrication to prevent it from damaging the watch. The need for oil is one of the very few notable downsides of the lever escapement.

Essentially, what Dr Daniels did with his invention was find a way to reduce all this knocking around that goes on within a lever escapement as it locks and frees the barrel spring. The co-axial escapement utilises a system of three pallets that separate the locking function from the impulse, which means that the work of freeing the locked pallet levers is transferred onto a third lever. This third lever engages a separate cog, which shares its axis with the main escapement cog. (Hence the name: co-axial.)

This generates radial friction at the impulse surfaces, rather than the sliding friction of the lever escapement. That significantly reduces the wear on the pallet stones, which reduces the need for lubrication – lengthening the service intervals for the watch in question.

Breaking the status quo – the history of the co-axial escapement

By the time Dr Daniels developed his co-axial escapement, the lever escapement had been the go-to mechanism for well over 200 years. That’s one heck of a legacy to overcome, even for an invention as ingenious as his. Consequently, from the moment he unveiled his creation in 1974, it took him a full six years to even secure a patent.

The moment he was ready, he took his new escapement over to Switzerland, the seat of the world’s most prestigious luxury watchmakers, including Patek Philippe. Surprisingly enough, they all turned him down. The industry was still in the midst of the Quartz Crisis, which could well have been a major factor influencing their decision; there was a strong feeling at the time that quartz could end up being the future of watchmaking.

Thankfully, Daniels had enough faith in his creation not to be that easily deterred. Having first presented his drawings in a pocket watch, he went on to hand-build the components and install a prototype co-axial escapement in the calibre 1045 of his personal OMEGA Speedmaster. He then presented a second prototype to some of the most esteemed watch manufacturers.

Even so, it took another few decades for his creation to finally receive the recognition it deserved. The mechanical watch industry had successfully navigated the choppy waters of the Quartz Crisis, and was enjoying a revival. By then, Daniels and his co-axial escapement had caught the attention of Nicolas G Hayek, the chairman of the Swatch Group (widely renowned as the parent company of OMEGA.) Hayek promptly acquired the patent, and OMEGA began to focus its attention on incorporating the co-axial escapement into its newest timepieces.

Intrigued observers wouldn’t have to wait until the new millennium to see them. In 1999, OMEGA released a DeVille with an ETA 2892 that was coupled with a co-axial escapement. It was christened the Caliber 2500. The reaction from the press and public was resounding – a legend was finally born.

The legacy of the co-axial escapement

With OMEGA’s backing, the world was finally able to understand the genius behind Daniels’ achievement. Besides the lever escapement, it’s the only escapement that’s still produced on an industrial scale. It earned George Daniels widespread acclaim, and today many regard him to be the most important watchmaker since Abraham-Louis Breguet. (A comparison Daniels probably would have been flattered by – he was quite the expert on Breguet himself, to the extent that back in the 1960s, he was already highly sought-after as a consultant on the legendary watchmaker’s work.)

OMEGA still proudly bears the banner for Daniels’ work today, by incorporating the co-axial mechanism into almost every watch it releases. The escapement also set the bar for the famously exacting quality requirements that a watch must meet to be granted OMEGA’s Master Chronometer certification. In fact, it’s safe to say that without Daniels’ co-axial escapement, OMEGA may even never have developed its Master Chronometer certification at all. There are very few individual horological innovations which can lay claim to that kind of sweeping influence on the industry at large, and it’s just one more testament to the ingenuity of Daniels’ creation – one that will likely be used as the blueprint for many more timepieces for decades to come.

If you’re taken by the idea of a co-axial escapement in your own luxury watch, you’re in exactly the right place. We’ve got a magnificent range of OMEGA watches to choose from right here on our site, from classic models to brand-new arrivals. Or if you’d prefer, you can browse them at your leisure in our expansive Blackpool showroom, where our friendly staff will be on hand to address any queries you might have.

If you’ve got any questions you’d like answered immediately, don’t hesitate to get in touch with us on on 01253 754 940, emailing us on enquiries@leonarddews.co.uk, or simply asking one of our showroom staff. We’re always happy to help!